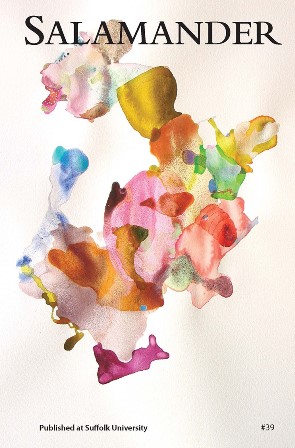 Elliot Ackerman, author of the novel Green on Blue, served five tours of duty in Iraq and Afghanistan and received the Silver Star, the Bronze Star for Valor, and the Purple Heart. A former White House Fellow, his essays and fiction have appeared in The New Yorker, The Atlantic, The New Republic, and Ecotone. He lives in Istanbul, where he writes on the Syrian Civil War.

Michael Bazzett’s poems have appeared in Ploughshares, Massachusetts Review, and Best New Poets. He received the Lindquist & Vennum Prize for his first full-length collection, You Must Remember This (Milkweed, 2014).

Susan Nisenbaum Becker’s book, Little Architects of Time and Space, was published in 2013. She has received residencies from the Banff Center, Yaddo, MacDowell, and the Ragdale Foundation, and is published widely.

Ciaran Berry is a 2012 Whiting Writers’ Award winner. His full-length collections are The Sphere of Birds (2008) and The Dead Zoo (2013), which was a recent Poetry Book Society Recommendation.

Kevin Boyle’s book, A Home for Wayward Girls, was published by New Issues. His chapbook, The Lullaby of History, won the Campbell Poetry Prize. He teaches at Elon University in North Carolina.

Andrea Cohen’s new poetry collection, Furs Not Mine, will be out soon with Four Way Books. She directs the Blacksmith House Poetry Series in Cambridge, MA, and the Writers House at Merrimack College.

Brendan Constantine is a poet based in Los Angeles. His most recent collections are Birthday Girl with Possum (Write Bloody Publishing) and Calamity Joe (Red Hen Press). He teaches poetry at the Windward School.

Nick Courtright is the author of Let There Be Light and Punchline. His writing has appeared in The Southern Review, Agni, Boston Review, and Kenyon Review Online, among many others.

Maggie Dietz is author of Perennial Fall, which won New Hampshire’s Jane Kenyon Award. She teaches in the creative writing concentration at the University of Massachusetts Lowell.

Valerie Duff-Strautmann is the author of To the New World (Salmon Poetry). Reviews and poems have appeared recently or are forthcoming in the Boston Globe, Blackbox Manifold, The Common, and Gulf Coast online.

Elyse Fenton is the author of the award-winning poetry collection, Clamor. Her second manuscript, Sweet Insurgent, won the PSA’s Alice Fay di Castagnola Prize. She lives with her family in Portland, Oregon.

Meredith Davies Hadaway is the author of Fishing Secrets of the Dead, The River is a Reason, and At the Narrows (forthcoming from Word Poetry, 2015).

Eva Hooker is Professor of English and Writer-in-Residence at Saint Mary’s College, Notre Dame, Indiana. Lake Superior and Madeline Island have left their watermark on the poems that make up Notes for Survival in the Wilderness (Chapiteau Press, 2013).

Lizzy Huitson lives in Abingdon, England. Her chapbook, The God of Cold Girls and Cold Places, is due to be published by Dancing Girl Press in 2015.

Nathaniel Hunt lives in Brookline, MA, where he is working toward his MFA at UMass-Boston. His poems have been featured in Iconoclast, Mayo Review, Poetry Quarterly, and elsewhere.

Marilyn Jurich, an Emerita Professor in English at Suffolk University, is that author of Defying the Eye Chart (Mayapple Press, 2008). Other poems have appeared in various journals.

J. Kates is a poet and literary translator who lives in Fitzwilliam, New Hampshire.

Alice Kociemba directs Calliope, a monthly poetry series, and its winter craft workshops. She is the guest editor of the 2015 edition of Common Threads, a poetry discussion project of the Massachusetts Poetry Festival.

Jacqueline Kolosov’s third poetry collection is Memory of Blue (Salmon, 2014). She is Professor of English at Texas Tech and lives with her family, including four dogs and an Andalusian mare, on the high plains.

Frannie Lindsay’s fourth volume of poetry, Our Vanishing, was awarded the Benjamin Saltman Award by Red Hen Press. Her work appears in Best American Poetry 2014. She has received The Missouri Review Prize and fellowships from the NEA and Massachusetts Cultural Council.

Elizabeth Lund is the longtime poetry critic of The Christian Science Monitor. She also writes about poetry for The Washington Post and Wellesley magazine. Her own poems have appeared in the US, Canada, and Great Britain.

Francis Lunney has previously published poems in The Owen Wister Review, Outside Bozeman, and Appalachia. He lives in Salem, Massachusetts, and works in a nearby town as an elementary school reading specialist.

Sarah Hulyk Maxwell’s most recent work can be found in Small Po[r]tions, and is forthcoming in Bitter Oleander and Up the Staircase Quarterly. She lives in Pittsburgh.

Lena Moses-Schmitt’s work has appeared in The Pinch, The Paris-American, Superstition Review, and elsewhere. She lives in Austin, Texas.

Margaret Osburn teaches creative nonfiction writing at The Johns Hopkins University.  She is the recipient of regional press awards (IN) for news and feature writing and wrote a documentary film broadcast on PBS.

Jessica Plante’s poems, book reviews, and interviews can be found in Crab Orchard Review, Birdfeast, The Collagist, Gingerbread House, The Philadelphia Review of Books, Saw Palm Review, StorySouth, and others.

Elizabeth Preston is a science writer, editor, and blogger in Somerville, MA. Her poems have previously appeared in Stone Canoe and the Sugar House Review.

Ann Ropp received her BFA from the University of Illinois and her MFA from Columbia University. She is currently continuing her investigation into the sex of color. The paintings is this issue are from two recent series, “Color Balance” and “The Circus Years.”

Catherine Sasanov’s poems, written out of her research into slavery in Colonial Massachusetts and its Province of Maine, can be read in the Fall 2014/Winter 2015 issues of Skidrow Penthouse, Poor Yorick, and Commonplace. An accompanying interview and essay appear in the last two journals.

Eric McHenry teaches English at Washburn University. His poems have recently appeared or are forthcoming in Field, Cincinnati Review, Poetry International, and Poetry Northwest, from whom he received the Theodore Roethke Prize. His next book, Odd Evening, is forthcoming from Waywiser Press.

Emily Schulten is the author of Rest in Black Haw (New Plains Press), and her  poems appear or are forthcoming in North American Review, Mid-American Review, Prairie Schooner, New Ohio Review, New Orleans Review, and others.

Dara-Lyn Shrager’s poems have appeared in journals including Barn Owl Review, Ontario Review, The Comstock Review, and others. She is the founding co-editor of the literary journal Radar. Her chapbook, The Boy From Egypt, was published by Finishing Line Press in 2009.

Parini Shroff received her JD in Los Angeles before moving to Austin, where she is is currently pursuing her MFA at the University of Texas. Her work will be featured in The MacGuffin and Southern Humanities Review.

Chris Siteman earned an MFA from Emerson College and a JD from Suffolk Law School. Work is forthcoming or has appeared in Hayden’s Ferry Review, The Transnational, Bearing Witness, The Worcester Review, and Blood Lotus.

Joseph Spece is editor at Sharkpack Poetry Review. His poems and fiction have recently appeared in Agni, 3:AM, Berfrois, Orion, and Tri-Quarterly. His first book of poems, Roads (Cherry Grove), was published in 2013.

Frederick Speers is a recipient of the Fitzpatrick/Thoreau award from the Vermont Studio Center, and his poetry has appeared or is forthcoming in Agni, Forklift, Ohio: A Journal of Poetry, and The Straddler. He lives with his husband in the Bay Area.

Julian Stannard is  a Reader in Creative Writing at the University of Winchester (UK); he is the author of Rina’s War (Peterloo, 2001), The Red Zone (Peterloo, 2007), The Parrots of Villa Gruber Discover Lapis Lazuli (Salmon, 2011), and The Street of Perfect Love (Worple, 2014).

Catherine Stearns’s work has been anthologized in collections of American and British poetry and writing by American women abroad. Her poetry has appeared in many journals.

Julia Story is from Indiana and now lives in Somerville, MA. She is the author of Post Moxie (Sarabande 2010). Her chapbook, The Trapdoor, will be published by Dancing Girl Press in November 2014.

Todd Swift is a British-Canadian poet, editor, and critic who teaches at the University of Worcester in the UK. His poems and reviews have appeared in many leading journals, including Poetry (Chicago), Poetry London, and the Poetry Review. His most recent collection is The Ministry of Emergency Situations: Selected Poems, from Marick Press, Michigan (2014). He is publisher of Eyewear press.

Aigerim Tazhi was born in the western Kazakh city of Aktobe in 1981. She is a graduate of the Aktyubinsk (Zhubanov) State University. She has received numerous literary prizes and lives in Almaty, Kazakhstan.

Colin Thacher lives in Portland, Oregon. He has worked as a production manager and producer for reality television and animated commercials, and received his MFA from Portland State. This is his first appearance in print.

Daniel Tobin is the author of six books of poems, most recently Belated Heavens (winner of the Massachusetts Book Award in Poetry) and The Net. He is the recipient of creative writing fellowships from the National Endowment for the Arts and the John Simon Guggenheim Foundation.

A graduate of Warren Wilson College’s MFA program, Karen Tucker is the recipient of an Elizabeth George Foundation Grant for Emerging Writers. She lives in Asheville, North Carolina.

Barrett Warner is the author of two chapbooks,  My Friend Ken Harvey (Publishing Genius, 2014) and Til I’m Blue in the Face (Tropos, 1994). He won the 2014 Cloudbank poetry prize and his work has recently appeared in Consequence Magazine, Revolution John, Atticus Review, and elsewhere.

Derek JG Williams is an MFA candidate at UMass-Boston. His poems are published or forthcoming in New Ohio Review, Redivider, Best New Poets 2013, The Cortland Review, and H_NGM_N, among others.

Kristin Camitta Zimet is the editor and co-founder of The Sow’s Ear Poetry Review. Her first poetry collection is Take in My Arms the Dark. Her poems are widely published in anthologies and journals including Natural Bridge, Crab Orchard Review, and Poet Lore.