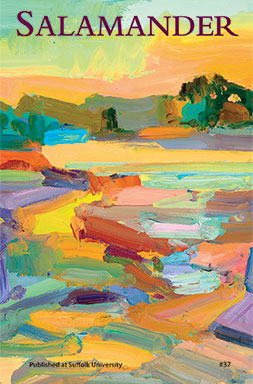 Annik Adey-​​Babinski is a Canadian studying for her MFA in poetry at Florida International University in Miami. You can find her work in forthcoming editions of Hobart, Coldfront, and mojo journals.

Larry Beckett’s “Willamette” is from a longer sequence, begun in Songs and Sonnets, from Rainy Day Women Press. Beat Poetry, on the lights of the 50s San Francisco renaissance, is out from Beatdom Books. The long poem Paul Bunyan is forthcoming from Smokestack Books.

Mary Buchinger’s poems have appeared in AGNI, Cortland Review, Nimrod, Slice Magazine, The Massachusetts Review, and elsewhere. She is Associate Professor of English and Communication Studies at MCPHS University in Boston.

Anthony Caleshu is the author of a critical monograph on the poetry of James Tate, and two books of poems, most recently, Of Whales: in Print, in Paint, in Sea, in Stars, in Coin, in House, in Margins (Salt, 2010). Poems from his new book in progress have appeared in Boston Review, Conjunctions, and Narrative Magazine. He is Professor of Poetry at Plymouth University in Southwest England.

Drew Calvert is a freelance writer based in Kuala Lumpur, Malaysia. Previous work has appeared in The Literary Review, The Common, AGNI Online, and elsewhere.

Lauren Camp is the author of This Business of Wisdom (West End Press). Her second collection, The Dailiness, will be published in 2014. She hosts “Audio Saucepan,” a global music/​poetry program on Santa Fe Public Radio, and writes the poetry blog Which Silk Shirt.

Rochelle Distelheim’s work has been published in The North American Review, Nimrod, StoryQuarterly, Other Voices, Confrontation, Mississippi Valley Review, PersimmonTree​.org, Whetstone, and the Chicago Tribune, among others. She has been awarded The Katharine Anne Porter Prize in Fiction, The William Faulkner Gold Medal in Novel and Novel-​​in-​​Progress, was a finalist in the Press 53 Open Awards, and has nominations for both the Pushcart Prize and the Best American Short Stories 2013.

“So nice to appear in the pages of Salamander once more.”

Kimberly Driggers is from Charleston, South Carolina. Currently, she lives in Fayetteville, Arkansas, where she is pursuing an M.F.A. at the University of Arkansas. This is her first publication.

Jen Fawkes’s fiction has appeared or is forthcoming in One Story, The Iowa Review, Michigan Quarterly Review, The Massachusetts Review, Mid-​​American Review, Barrelhouse, and other journals. She won the 2013 Washington Square Award in Flash Fiction, and her work has twice been nominated for a Pushcart. She holds an MFA from Hollins University and a BA from Columbia University.

Matthew Fee is currently a student at the University of Utah. He is the author of Genesis (forthcoming from Gauss PDF, 2013). Recent work is published or forthcoming in journals such as Lemon Hound, The Laurel Review, Sixth Finch, Hunger Mountain, and The Cortland Review.

Luke Fiske is currently an MBA candidate at the University of Cape Town, South Africa. His fiction has appeared in The Indiana Review, Connecticut Review, Georgetown Review, and New Contrast: The Journal of South African Literature. An earlier, shorter version of “Do You Know What a Leader is?” appeared in Bloody Satisfied, an anthology of South African crime fiction.

Rick Gray currently teaches at the American University of Afghanistan in Kabul. His essay, “Total Darkness,” will appear in the forthcoming book, Neither Here Nor There: An Anthology of Reverse Culture Shock. When not in Afghanistan he lives with his wife and twin daughters in Florida.

Robert Hirschfield is a New York-​​based writer of literary nonfiction and poetry. His work appears in The Tablet, Midstream, Adbusters, Sojourners and many other publications, and he reviews books of poetry for The Jerusalem Report.

Lindsay Illich teaches writing at Curry College in Milton, MA. She completed her Ph.D. in English at Texas A&M University.

Brad Johnson’s first full-​​length collection The Happiness Theory is due out from Main Street Press in the fall of 2013. He has published four chapbooks of poetry and has had work appear in Atlanta Review, Poet Lore, Southern Indiana Review and others.

Judy Katz’s work has appeared in The New York Times Book Review, The Women’s Review of Books, upstreet, and other publications, and has twice been nominated for a Pushcart Prize. Her manuscript, How News Travels, was a semi-​​finalist for the Alex Rudnitsky First Book Prize.

Lesley Kimball’s poems have appeared in The Pedestal, Omphalos, Ink-​​Filled Page, Café Review, Juicebox, Ballard Street, Foundling Review, and the anthologies The Other Side of Sorrow and the 2010 Poets’ Guide to NH. Lesley lives and writes in Portsmouth NH.

Aviya Kushner’s book, The Grammar of God, is forthcoming from Spiegel & Grau/​Random House. Her poems have appeared in Poetry International, Literary Imagination, and Harvard Review, and her essays have appeared in The Wilson Quarterly, Gulf Coast, Poets & Writers, Partisan Review, and The Jerusalem Post. She teaches at Columbia College Chicago and is a contributing editor at A Public Space.

Deborah Leipziger is a poet, author, professor, and editor. Her chapbook, Flower Map, was recently published by Finishing Line Press. She is the co-​​editor of Soul-​​Lit, an online poetry magazine. She works in the field of human rights and business.

Brandon Lewis lives in NYC with his wife and daughter and teaches in the Bronx. He received an MFA in poetry at George Mason and is the former poetry editor of Porcupine. His writing is published in such journals as Fifth Wednesday, HTMLgiant, Poet Lore, Harpur Palate, Entasis, Fogged Clarity, Water~Stone Review, Blood Lotus, and Oranges and Sardines. He is an expert diaper-​​changer.

Fred Marchant is the author of four books of poetry, the most recent of which is The Looking House (Graywolf Press, 2009). His first book, Tipping Point won the 1993 Washington Prize from The Word Works, Inc., and was released in a second edition in 2013. He is Professor of English and Founding Director of the Creative Writing Program at Suffolk University.

John McCarthy’s poetry and prose have appeared in The First Line, The Conium Review, Popshot Magazine (UK), and The Lindenwood Review, among others. He lives in Springfield, Illinois, where he is the Assistant Editor of Quiddity International Literary Journal and Public-​​Radio Program.

Shane McCrae is the author of Mule, Blood, Forgiveness Forgiveness (forthcoming from Factory Hollow Press), and three chapbooks—most recently, Nonfiction. His poems have appeared in The Best American Poetry, The American Poetry Review, Fence, Gulf Coast, and elsewhere, and he has received a Whiting Writer’s Award and a fellowship from the NEA. He teaches in the brief-​​residency MFA program at Spalding University.

Three-​​time Pushcart prize winner Jill McDonough wrote Habeas Corpus and Where You Live. She directs the MFA program at UMass-​​Boston and 24PearlStreet, the FAWC online.

Daniel Meltz is a technical writer at Google and lives in Manhattan between a pizza parlor and a supermarket. His poetry has been published in American Poetry Review, Assisi, Best New Poets 2012, CCAR Journal, FortyOunceBachelors, Lavender Review, Mudfish, Talking Writing, Temenos, upstreet and others.

Romanian writer Liliana Ursu is the author of eight collections of poetry and two collection of prose. Her most recent volume in English is A Path to the Sea (translated by Liliana Ursu, Adam J. Sorkin, and Tess Gallagher, 2011). These poems are from Gradina din turn/​ Der Garten im Turm (2012).

Mihaela Moscaliuc is the author of Father Dirt (Alice James Books, 2010) and translator of Carmelia Leonte’s The Hiss of the Viper (forthcoming, Carnegie Mellon University Press). She teaches at Monmouth University, NJ.

Mary Natwick’s poetry collections are Iron Pot (2011) and Waking a Lover (2012), from Spoken Incense Press. When not in the wilderness, she can be found homeschooling her son, feeding her family, and lamenting what remains undone in her home.

Dawn Potter directs the Frost Place Conference on Poetry and Teaching. Same Old Story, her third collection of poetry, is forthcoming from CavanKerry Press in Spring 2014.

Octavio Quintanilla’s poems have appeared or are forthcoming in RHINO, Alaska Quarterly Review, The Bitter Oleander, Los Angeles Review, and elsewhere. He has been nominated twice for a Pushcart Prize. He teaches Literature and Creative Writing at Our Lady of the Lake University.

Peter Schmitt is the author of five collections of poems, including Renewing the Vows (David Robert Books).  The 2012 winner of The Julia Peterkin Award in Poetry from Converse College, he has work forthcoming in The Hopkins Review and The Hudson Review.

Gary Scott has been published in the Kenyon Review, the Gettysburg Review, and elsewhere. He lives in Bellingham, Washington.

Julian Stannard is the author of three collections. His most recent is The Parrots of Villa Gruber Discover Lapis Lazuli (Salmon, 2011).

Gabriella R. Tallmadge serves as a Web and Social Media Manager for One Pause Poetry. Her poetry is published or forthcoming in Crazyhorse, War, Literature & the Arts, and Blunderbuss Magazine.

Kenny Tanemura has an MFA from Purdue University and his poems have appeared in or are forthcoming in The Iowa Review, Chicago Quarterly Review, Best New Poets 2013 and others. He is working on a book about Japan.

Eugenio Volpe has published stories with New York Tyrant, Post Road, Smokelong Quarterly, Superstition Review and more. He has won the PEN Discovery Award and been nominated for both Pushcart and Best of the Web prizes. His novella King James will be published in fall of 2013. He lives in Bristol, RI.

Gabriel Welsch is the author of The Four Horsepersons of a Disappointing Apocalypse, two other poetry books, and a chapbook. He lives in Huntingdon, PA, with his family, and is a vice president at Juniata College.

Carol Westberg’s first book of poems, Slipstream, was a finalist for the 2011 New Hampshire Literary Award for Outstanding Book of Poetry. Her work has appeared in Prairie Schooner, Hunger Mountain, CALYX, and other journals. She holds an MFA from Vermont College and an MA in Teaching from Stanford.

David Zerby is an attorney by profession, a geek by inclination, and a writer at heart. He is thrilled to be published in Salamander.

Anzhelina Polonskaya was born in Malakhovka, a small town near Moscow. Polonskaya has published translations in Descant, The Ameircan Poetry Review, Boulevard, The Iowa Review, The Massachusetts Review, Prairie Schooner, Poetry Daily, and AGNI, among others. Her work has been translated into Dutch, Slovenian, Latvian, and Spanish.

Andrew Wachtel is president of the American University of Central Asia in Bishkek, Kyrgyzstan. Previously he was dean of the Graduate School at Northwestern University. He is a fellow of the American Academy of Arts & Sciences, a member of the Council on Foreign Relations, and an active translator from multiple Slavic languages.