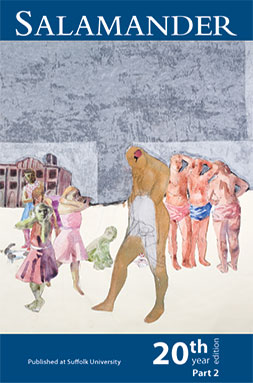 Karen An-​​hwei Lee is the author of Phyla of Joy (Tupelo Press, 2012), Ardor (Tupelo Press, 2008) and In Medias Res (Sarabande Books, 2004), winner of the Norma Farber First Book Award from the Poetry Society of America. The recipient of an NEA Grant, she lives and teaches in Southern California. Her poem in this issue refers to a blue moon on August 31, 2012, mentioned in the Los Angeles Times Blog.

Molly Bashaw grew up on small farms in Massachusetts and upstate New York. For the last twelve years she lived and worked as a professional bass-​​trombonist in Europe. Currently she is serving as George Bennett Fellow writer-​​in-​​residence at Phillips Exeter Academy in New Hampshire.

Michael Bazzett has new poems forthcoming in Ploughshares, Redivider, Massachusetts Review, Pleiades, Salt Hill, Literary Imagination, and Prairie Schooner. He is the author of The Imaginary City, recently published in the OW! Arts Chapbook Series, and They: A Field Guide, forthcoming from Barge Press in early 2013. He lives in Minneapolis with his wife and two children.

Denise Bergman is the author of Seeing Annie Sullivan, poems based on the early life of Helen Keller’s teacher, and, forthcoming, The Telling. She conceived and edited City River of Voices, an anthology of urban poetry. An excerpt of her poem “Red,” about a slaughterhouse, is permanently installed as public art.

Pam Bernard is a poet, painter, editor, and adjunct professor of creative writing.  Her latest of collection of poems is entitled Blood Garden: An Elegy for Raymond. A book-​​length poem entitled Esther is forthcoming. She teaches creative writing at New Hampshire Institute of Art and Franklin Pierce University.

Karina Borowicz’s collection The Bees Are Waiting (2012) was selected by Franz Wright for the Marick Press Poetry Prize. Her work has appeared in Agni, The Southern Review, and Columbia Poetry Review, and her translations have been featured in Poetry Daily.

Sarah M. Brownsberger is a poet, novelist, and translator based near Reykjavik, Iceland.

Andrea Cohen’s fourth poetry collection, Furs Not Mine, will be published by Four Way Books. Her most recent books are Kentucky Derby and Long Division. She directs the Blacksmith House Poetry Series.

Rita Gabis lives and teaches in New York City. She is currently at work on a memoir for Bloomsbury.

Heather Hartley is Paris editor at Tin House and the author of Knock Knock, released by Carnegie Mellon University Press. Her poems, essays and interviews have appeared in or on PBS NewsHour, The Guardian, The Rumpus, and elsewhere. She has curated Shakespeare & Company Bookshop’s weekly reading series. Her monthly column, “Apéritif,” about literary Paris, is on the Tin House website.

Michael Hettich has published a number of books of poetry, most recently Like Happiness (Anhinga, 2010) and The Animals Beyond Us (New Rivers, 2011). His most recent chapbook, The Measured Breathing, won the 2011 Swan Scythe Chapbook Prize.

Gwendolyn Jensen began writing poems when she retired in 2001 from the presidency of Wilson College. Her work has appeared in the Beloit Poetry Journal, Chautauqua, Measure, The Malahat Review, and Salamander. Her first book, Birthright (Birch Brook Press, 2011), is a letterpress edition, now in a second printing.

Luke Johnson is the author of After the Ark (New York Quarterly Books, 2011). His poems have appeared or are forthcoming in New England Review, Poetry Northwest, The Southern Review, The Threepenny Review, and elsewhere. He lives in Seattle.

Kasey Jueds won the 2012 Agnes Lynch Starrett Award from the University of Pittsburgh Press for her first book of poems, Keeper, which will be published by Pitt in the fall of 2013. She lives in Philadelphia.

George Kalogeris is the author of Dialogos: Paired Poems in Translation (Antilever) and of a book of poems, Camus: Carnets (Pressed Wafer).

Judy Katz-​​Levine is the author of two full-​​length collections of poetry, When The Arms Of Our Dreams Embrace (Saru, 1991) and Ocarina (Saru/​Tarsier, 2006). Her most recent chapbook is When Performers Swim, The Dice Are Cast (Ahadada, 2009). Poems have recently appeared or are forthcoming in Muddy River Poetry Review, 2 River Review, Blue Unicorn, Ekleksographia, and CCAR Journal.

Naira Kuzmich was born in Yerevan, Armenia, and raised in a Los Angeles neighborhood designated Little Armenia. Her fiction has appeared or is forthcoming in West Branch, Arts & Letters, Blackbird, Redivider, and elsewhere. Her nonfiction can also be found in Guernica and The Rumpus.

Danielle Legros Georges is an Associate Professor in the Creative Arts in Learning Division of Lesley University and the author of a book of poems, Maroon. Recent poems, essays, and reviews of hers have appeared in “The Bill Moyers Journal” (PBS Program), The Caribbean Writer’s Special Issue on Haiti, the Boston Haitian Reporter, Consequence, sx salon, and The Women’s Review of Books.

Yan Lin was born in Shanghai and grew up in Boston. A graduate of Wellesley College, she has work forthcoming from North American Review and Untucked Magazine. She is working on her first chapbook.

Estanislao Lopez holds a BA in Philosophy & Creative Writing from the University of Houston. He currently lives in Houston, where he teaches high school English. His work has appeared in New Ohio Review.

Calvin Olsen holds an MFA in Creative Writing from Boston University. His poems and translations have appeared in New Haven Review, 236, SWAMP, The Honey Land Review, Fire in the Pasture: 21st Century Mormon Poets, and others. He lives, teaches, and writes in Boston.

Lee Peterson is Instructor of English and Women’s Studies at Penn State University (Altoona campus). Her first book, Rooms and Fields, was selected by Jean Valentine for the Stan and Tom Wick Poetry Prize (Kent State University Press, 2004). “Fortune” is from a new series of poems entitled Into This World.

Jo Pitkin is the author of The Measure (Finishing Line Press), Cradle of the American Circus: Poems from Somers, New York (The History Press), and the forthcoming Commonplace Invasions (Salmon Poetry). She works as a freelance educational writer and lives in a village in the Hudson Valley within walking distance of the river.

Jacquelyn Pope is the author of Watermark, published by Marsh Hawk Press. Her poems and translations have recently appeared in PN Review, 14, The Hampden-​​Sydney Review, and elsewhere. She is the recipient of a 2012 PEN/​Heim Translation Fund grant.

Steven Ratiner’s poetry and reviews have appeared in Parnassus, Agni Review, Poetry Australia, The Washington Post and The Christian Science Monitor. His interview collection, Giving Their Word—Conversations with  Contemporary Poets, was re-​​issued in paperback. His manuscript Black Quilt is a sequence of poems triggered by his sister’s long ordeal with brain cancer—some of which are written in his sister’s voice.

Elizabeth Rees has published four chapbooks, most recently, Tilting Gravity, which won the Codhill Press contest in 2009. Her work has appeared in Partisan Review, Agni, and The New England Review. New work will appear in Nimrod, The Cape Rock and Atlanta Review.

Anna Ross is the author of If a Storm, selected by Julianna Baggot for the 2012 Robert Dana-​​Anhinga Prize for Poetry. Her poetry and criticism have most recently appeared in Barrow Street, Boston Review, Southern Poetry Review, and The American Reader.

Linda Rui Feng was born in Shanghai and holds degrees in both Chinese literature and geochemistry. She teaches Premodern Cultural Studies at the University of Toronto, and is finishing a novel about music, migration, and Mao. Her fiction and poetry have appeared in Nimrod, Green Mountains Review, and The Saint Ann’s Review.

Danielle Shutt earned an MFA in 2011 from Eastern Washington University, where she taught writing courses and served as a poetry editor for Willow Springs. Her poems are forthcoming or have appeared in The Journal, Hayden’s Ferry Review, Copper Nickel, Hotel Amerika, and PANK, among others. She lives in Richmond, VA.

Maggie Smith is the author of Lamp of the Body, Nesting Dolls, and The List of Dangers. She has received fellowships from the NEA and the Ohio Arts Council. Her poems appear in The Paris Review, The Southern Review, The Gettysburg Review, Court Green, The Iowa Review, and elsewhere.

Mel Wells was raised Mormon in Idaho and served a mission in Belgium. After graduating from BYU, she escaped to Portland, Oregon, and found her dream job at Literary Arts. She prefers whiskey while writing, coffee while editing, and has gone on the naked bike ride three times.

Steven Wingate’s debut short story collection Wifeshopping won the Bakeless Prize in Fiction from the Bread Loaf Writers’ Conference and was published by Houghton Mifflin Harcourt in 2008. His prose poem collection, Thirty-​​One Octets: Incantations and Meditations, is forthcoming from WordTech Communications/​CW Books. He is a contributing editor at Fiction Writers Review and an assistant professor at South Dakota State University, where he directs the Great Plains Writers Conference.