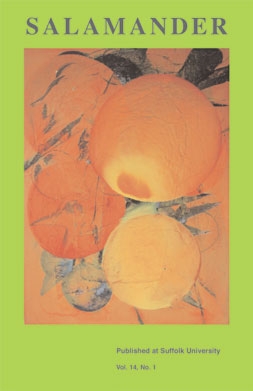 SoHyun Bae is the recipient of a 2007 John Simon Guggenheim Memorial Foundation Fellowship in Fine Arts. She has received numerous other awards including a New York Foundation for the Arts Fellowship, 2002; the Pollock-Krasner Foundation, Inc. Grant, 2000; and a Fellowship at the Corporation of Yaddo, 2000. Currently, she travels back and forth between New York City and Bologna, Italy.

Carrie Bennett’s first book of poetry, Biography of Water, won the 2004 Washington Prize and was published by Word Works. After receiving her MFA in Poetry from the University of Iowa’s Writers’ Workshop, she moved to Boston where she  currently teaches in the Writing Program at Boston University.

Founder of the Poetry Center at Smith College, Annie Boutelle teaches in the English Department there. Her first book of poems is Becoming Bone: Poems on the Life of Celia Thaxter. Her second, Nest of Thistles, won the 2005 Samuel French Morse Prize from Northeastern University.

Mariana Dan is the author of twelve books, including three collections of poetry. Dan was educated at the University of Bucharest and received her doctorate from the University of Belgrade, where she now heads the Romanian Department.

Adam Day’s work has appeared or is forthcoming in the American Poetry Review, Guernica, Kenyon Review, Gulf Coast, Indiana Review, and Antioch Review, among others, and has been included in the anthology Best New Poets 2008.

Patrick Donnelly’s collection of poems is The Charge (Ausable Press, 2003). He is an Associate Editor at Four Ways Books, and has taught writing at Colby College, the Bread Load Writers’ Conference and the Frost Place. He is the recipient of an Artist Fellowship from the Massachusetts Cultural Council.

Jen Garfield is from Chicago and was a recent recipient of an Illinois Arts Council Literary Award. Her chapbook, Excuses for Happiness, is forthcoming from Puddinghouse Publications. A former poetry editor for Prick of the Spindle, she now lives and teaches in Beijing.

Anne Germanacos’ work has appeared recently in Santa Monica Review, Descant, Florida Review, Elimae, Diagram and many others. She lives in San Francisco and on Crete.

Seana Graham’s story “The Pirate’s True Love” was selected for both Fantasy: the Very Best of 2005 and The Best of Lady Churchill’s Wristlet. “Marina” won the seventh annual Zone 3 Fiction Award. She has most recently contributed to Ping Pong, out of the Henry Miller Library, an to a horror anthology, Carpathian Shadows, Volume Two, edited by Lea Schizas. She works for a large independent bookstore in Santa Cruz.

Jeffrey Harrison is the author of four full-​​length books of poetry–most recently Incomplete Knowledge (Four Way Books), which made the Book Sense top ten poetry list for 2007 and was runner-​​up for the 2008 Poets’ Prize–as well as of The Names of Things: New and Selected Poems, published by the Waywiser Press. A recipient of Guggenheim and NEA Fellowships, he teaches in the Stonecoast MFA Program.

Eva Hooker is Professor of English and Writer in Residence at Saint Mary’s College, Notre Dame, Indiana. The Winter Keeper, a hand bound chapbook (Chapiteau Press, Montpelier, Vermont, 2000), was a finalist for the Minnesota Book Award in poetry in 2001. Her poems have recently appeared or are forthcoming in the Harvard Review, Salmagundi, Water~Stone, Orion, Agni, Memorious 9, and Best New Poets 2008.

Roger Kessel practiced law for over 30 years after majoring in English at Columbia College, serving in the U.S. Navy, and graduating from Harvard Law School. His poetry has appeared in a variety of literary journals and other publications.

Aviya Kushner is the author of And There Was Evening, And There Was Morning (Spiegel & Grau/​Random House, forthcoming), and the experience of reading the Bible in English for the first time. Her essays and poems have recently appeared in the Wilson Quarterly, the Jerusalem Post, and the Jewish Quarterly. She teaches at Columbia College Chicago.

Adam LeFevre writes poems and plays. His first book, Everything All At Once, was published by Wesleyan University Press. He lives in New Paltz, New York, and makes his living as an actor on stage, screen, and television.

A. Loudermilk’s Strange Valentine won the Crab Orchard Series in Poetry First Book Award and was published in 2005. Individual poems have appeared in Pool, Margie, Tin House, and the Cream City Review. Loudermilk lives in Baltimore and teaches literature and creative writing at Maryland Institute College of Art.

Trey Moody lives with his wife in Austin, Texas, in an old yellow house. He teaches English Composition at Texas State University, where he is completing his MFA and is the Poetry Editor for Front Porch. Recent poems have appeared or are forthcoming in Alice Blue Review; Diagram; Forklift, Ohio; Handsome; and Third Coast.

Sue Nacey coordinates the MFA in Creative Writing Program at Hunter College in New York City. Her poetry has appeared in Conduit and Real/​Poetik and is forthcoming in Inertia Magazine.

Lesléa Newman is the author of more than fifty books for adults and children including the poetry collections Signs for Love and Still Life with Buddy. Her latest book, Nobody’s Mother, is forthcoming from Orchard House Press. She is Poet Laureate of Northampton, Massachusetts.

Thomas O’Grady is a member of the Creative Writing faculty at the University of Massachusetts Boston. His first book of poems, What Really Matters, was published in 2000 by McGill-Queen’s University Press. He has just completed the manuscript for a second book, Makeover.

Kevin Oberlin lives and writes in Cincinnati. His sonnet sequence Spotlit Girl was selected as the winner of the 2006 Wick Poetry Chapbook Competition. His work has appeared recently in Diagram; Forklift, Ohio; and North American Review.

Catherine Parnell’s recent and forthcoming publications include The Kingdom of His Will (chapbook) as well as stories and reviews in a number of publications including Post Road, The Baltimore Review, roger, Dos Passos Review, and Painted Bride Quarterly.

Glen Pourciau’s short-​​story collection Invite won the 2008 Iowa Short Fiction Award and was recently published by the University of Iowa Press. His stories have appeared in the Paris Review, New England Review, and other magazines.

Lucyna Prostko was born in Poland. She received her M.F.A. in Poetry from New York University, where she was awarded the New York Times Fellowship. Her first collection of poems, Infinite Beginnings, is forthcoming in the spring.

Kate Reuther’s short story “Your New Smile Starts Here” was the winner of the 2007 Chris O’Malley Prize in Fiction from the Madison Review. A graduate of Yale and the Vermont College of Fine Arts, she lives in Washington Heights in NYC with her husband and two boys.

Laurie Rosenblatt is a practicing physician at Dana-​​Farber Cancer Institute in Boston, MA. Her poetry has appeared in Harvard Review, the Bellevue Literary Review, and Per Contra, among others.

Jason Ranon Uri Roststein currently lives in Toronto where he is a Visiting Scholar at Massey College of the University of Toronto. He is Poetry Editor of the Jewish Quarterly and Associate Editor of Kilimanjaro, an art magazine, both in London, England.

Stephen Sandy’s books include The Thread, New and Selected Poems (1998); Weathers Permitting (2005); and Netsuke Days (2008). His CD Timex (Sandy reading poems with music) is from Dish-​​washer Studio. His poem “Sang the Turnkey” was set for voice, piano, & violin by Jeffrey Levine.

Gerard Smyth’s poems have appeared on Poetry Daily and in Denver Quarterly, among other journals. He published widely in Ireland and Britain, and his work appears in Spanish, Hungarian, Romanian and Polish translations. His sixth collection of poetry, The Mirror Tent, was published in 2007 by Dedalus Press.

Mark Terrill shipped out of San Francisco as a merchant seaman to the Far East and beyond and has lived in German since 1984, where he’s been scraping by in various incarnations, including shipyard welder, road manager for rock bands, cook, postal worker, and poet. The author of 15 books & chapbooks and three-​​time nominee for the Puchcart Prize, his work has been translated into German, French and Portuguese.

Harry Thomas has published translations and his own poems, essays, and reviews in many magazines, most recently in Poetry Northwest, the Michigan Quarterly Review, Threepenny Review, and on Slate. His most recent book is Montale in English. He is the editor in chief of Handsel Books, an affiliate of Random House.

Lee Upton’s fifth book of poems, Undid in the Land of Undone, was published by New Issues Press. Her poetry appeared in Best American Poetry 2008. She is also the author of many short stories and four books of literary criticism.

Gary Whited is a poet, philosopher and psychotherapist. His work has appeared in the Atlanta Review (International Merit Award in 2003), Plainsongs (Award poem 2007), the Aurorean, Bellowing Ark, Red Owl Magazine, and other publications. He is currently working on a manuscript titled Having Listened.