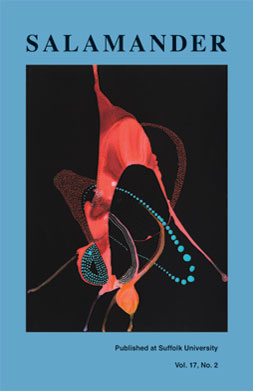 Julia Fernandez-Pol, artist, received her MFA from Boston University and her BFA from Washington University in St. Louis. She has exhibited in Buenos Aires, Argentina, and in Washington, D.C., New York, Texas, Massachusetts, and Colorado. Her awards include a Vermont Studio Partial Fellowship and a Boston Young Contemporaries Prize.

David Abrams’ short stories have appeared in Esquire, Narrative, The Literarian, Connecticut Review, The Greensboro Review, The Missouri Review, and other literary quarterlies. His novel about the Iraq War, Fobbit, will be published by Grove/​Atlantic in September 2012.

Shane Castle is a Montana-​​based writer and hobby farmer who recently started an alternative newspaper called the Helena Vigilante. His fiction has appeared in Black Warrior Review, Indiana Review, The Humanist, Iron Horse Literary Review, and online at McSweeney’s Internet Tendency. He is currently redrafting a novel and building a short-​​story collection.

Austin Duffy is from Dundalk, Ireland. He currently lives in Washington, D.C. with his wife. He is a practicing medical oncologist, working at the National Institutes of Health.

Jenn Hollmeyer is a founding editor of Fifth Wednesday Journal and holds an MFA in writing and literature from the Bennington Writing Seminars. Her stories, essays, and poems have appeared or are forthcoming in Post Road, Meridian, Etchings, and other publications. Jenn works as an advertising copywriter and paints architectural portraits. She and her husband live near Chicago in a blue house with a white dog named Red.

Sarah Hulse is an MFA candidate at the University of Oregon and has been named the 2012–2013 James C. McCreight Fiction Fellow at the Wisconsin Institute for Creative Writing. Her fiction has appeared in Willow Springs and Witness; her story “Sine Die” won the 2011 Willow Springs Fiction Prize. She is currently at work on her first novel.

E. A. Neeves has an MFA in Creative Writing from Emerson College and a BA in English from Duke University. Her fiction has also appeared in The Legendary and Midwest Literary Magazine. Currently, she lives in Boston, MA.

Tam Lin Neville is the author of two poetry collections: Journey Cake (BkMk Press, 1998) and more recently, Triage, from Cervena Barva Press. Her poems and reviews have appeared in Harvard Review, Mademoiselle, American Poetry Review, Ironwood, and Threepenny Review. She is co-​​editor of Off The Grid Press, a press for poets over sixty. She also works for Changing Lives Through Literature, an alternative sentencing program.

Mary O’Donoghue grew up in Co. Clare and lives in Boston. Her first novel Before the House Burns appeared in 2010 (Dublin: The Lilliput Press.) Her short stories, poems, and translations have appeared widely in Ireland and the US. She has received grants from the Massachusetts Cultural Council; the Tyrone Guthrie Centre Annaghmakerrig in conjunction with Virginia Center for the Creative Arts; and Vermont Studio Center. She teaches in the Arts and Humanities division at Babson College, and she is working on her second novel while on sabbatical.

Katia Kapovich hails from Soviet Moldova. Her membership in the late seventies and early eighties in a samizdat dissident group precluded publication of her writing in the USSR. A recipient of the 2001 Witter Bynner Fellowship from the US Library of Congress, Kapovich writes poetry and short fiction. She lives in Cambridge, MA, where she teaches literary courses at the Cambridge Center for Adult Education and co-​​edits Fulcrum.

Philip Nikolayev, born in Moscow and raised in Russia and Moldova, grew up equally fluent in English and Russian. His poetry is published internationally, and his poetry collections include Monkey Time and Letters from Aldenderry. He lives in Cambridge, MA.

Albert Somma is a recipient of the Edward J. Rehberg Memorial Prize for poetry. A vocalist, his album of Jazz standards, Songs of Innocence, Songs of Experience was released in 2003. He lives in Holmdel, NJ and is working on his first collection of short stories.