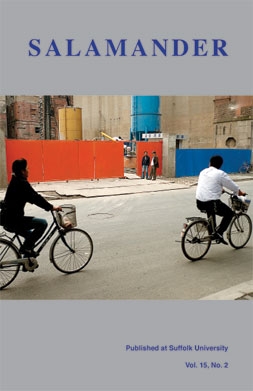 Paula Marafino Bernett is a poet living in Taos, NM. Her poems have appeared or are forthcoming in Sierra Nevada Review, Margie, and Rattle. She holds an M.F.A. from Sarah Lawrence College.

Chris Bullard’s work has appeared in various literary reviews, including Pleiades, Nimrod, River Styx, and Green Mountain Review. In 2009, Plan B Press published his chapbook, You Must Not Know Too Much.

Simmons B. Buntin is the founding editor of Terrain​.org: A Journal of the Built & Natural Environments. His first book of poetry, Riverfall, was published in 2005 by Ireland’s Salmon Poetry; his next collection, Bloom, is due from Salmon in October 2010. Recent work has appeared in Versal, Isotope, Orion, Hawk & Handsaw, High Desert Journal, and Sugar House Review.

Charles Coté is a clinical social worker in private practice. He lives with his wife and two sons in Rochester, NY. Publication credits include the Cortland Review, Upstreet, Boston Literary Magazine, Free Lunch, Blue Line, Connecticut River Review, and a chapbook, Flying for the Window (Finishing Line Press, 2008), elegies about his son’s illness and death.

Nick Courtright’s poetry is forthcoming or has appeared in the Southern Review, Boston Review, the Iowa Review, and the Kenyon Review Online, among numerous others, and a chapbook, Elegy for the Builder’s Wife, is out with Blue Hour Press. Most recently, he was the subject of a feature article on the Best American Poetry website.

David Crouse is the author of the short-​​story collections Copy Cats, winner of the Flannery O’Connor Award, and The Man Back There, winner of the Mary McCarthy Prize. He lives in Fairbanks, Alaska.

Kim Farrar is a poet, writer, and teacher living in Astoria, New York. Her poetry has appeared in the Ledge, Mudfish, Long Shot, Lullwater Review, Gravity Pulls You In, and other literary journals. Her essays and nonfiction have appeared in Illness and Grace, Voices of Autism, and Reflections: Narratives of Professional Helping.

Rebecca Morgan Frank’s first book, Little Murders Everywhere, is forthcoming from Salmon Poetry, and her poems have appeared in such places as Ploughshares, Post Road, and Best New Poets 2008. She was awarded the 2009 Poetry Society of America’s Alice Fay di Castagnola Award and is the editor-​​in-​​chief of the online magazine Memorious.

Sara Fraser lives near Boston. She is writing her second novel and works as a substitute teacher and freelance copyeditor.

Robert Funge’s recent publications include Epoch, 5AM, New Letters, Poetry East, Quarterly West. His latest of three books, The Passage, was published in Ireland, by Elo Press of Dublin, in 2001.

Major Jackson is the author of three collections of poetry: Holding Company, Hoops, and Leaving Saturn, a finalist for the National Book Critics Circle Award. He is the Richard Dennis Green and Gold Professor at University of Vermont and serves as the Poetry Editor of the Harvard Review.

Alice Kociemba is the director of Calliope–Poetry Readings at West Falmouth Library and is a member of Jamaica Pond Poets. Her chapbook, Death of Teaticket Hardware, was published in 2010. Recent poems have appeared in Plainsongs, Slant, and Roanoke Review among other journals.

Aidan Lee is a writer and journalist based in New Delhi, India. Her poetry has been accepted by J Journal, Aunt Chloe, and Bayou. Her journalism has appeared in the New York Times, the Wall Street Journal Asia, the Nation, the Christian Science Monitor, and the Financial Times. She has an MFA in creative writing from Hunter College.

David Dodd Lee is the author of seven books of poems, including The Nervous Filaments (Four Way Books, 2010) and Orphan, Indiana (University of Akron Press, forthcoming fall, 2010), as well as a book of Ashbery Erasure poems published by BlazeVox, entitled Sky Booths in the Breath Somewhere (2010). He lives in Indiana.

Peter Leight lives in Northampton, Massachusetts. He has previously published poems in Paris Review, Partisan Review, Agni, and other magazines.

J. Robert Lennon is the author of seven books of fiction, including the novels Mailman and Castle, and the story collection Pieces for the Left Hand. He lives in Ithaca, New York, where he teaches writing at Cornell University.

Primo Levi (1919−1987) lived most of his life in Turin. During the Nazi occupation of Italy, he joined a partisan group in the Alps, but was soon arrested and sent to an internment camp in Fossoli and then to Auschwitz. After the war he worked as a chemist in a paint factory and wrote many books, including Survival in Auschwitz and The Periodic Table, which London’s Royal Institute voted in 2006 “the best science book ever.”

Ed Madden is an associate professor of English at the University of South Carolina, as well as the writer in residence at Riverbanks Botanical Gardens in Columbia. His first book of poetry, Signals, was selected by Afaa Weaver for the 2007 South Carolina Poetry Book Prize.

William Palmer teaches at Alma College in central Michigan. His poetry and prose have appeared in the Bellingham Review, the Christian Science Monitor, Chicago Tribune, and elsewhere. His chapbook, A String of Blue Lights, was published by Pudding House in 2007.

R. D. Parker writes in more than one style. He has poems out or forthcoming in Caketrain, Abjective, Pank, and Marginalia.

Laura Powers is a graduate of the MFA program at Idaho. Currently, she is an English instructor at Lewis-​​Clark State College where she teaches developmental writing.

Martha Rhodes is the author of three collections of poetry: At the Gate, Perfect Disappearance, and Mother Quiet. She teaches at Sarah Lawrence College and the MFA Program for Writers at Warren Wilson College. She is a founding editor and the director of Four Way Books.

Tuvia Rübner, winner of the 2008 Israel Prize for Poetry, was born in 1924 in Bratislava, Slovakia, and immigrated to Mandatory Palestine, now Israel, in 1941; his family was lost in the camps. Rübner has published close to fifteen books of poetry, and is also a translator, an emeritus professor of Hebrew and comparative literature, and a member of the German Academy for Language and Literature.

Will Schutt is a writer and translator from New York. His work has appeared in such journals as A Public Space, Field, Harvard Review, and the Southern Review. He currently holds the Stadler Fellowship at Bucknell University.

David Scronce is the author of the chapbook, Letters to Liam (Red Berry Editions). Recent poems have appeared in 5AM, Confrontation, Hayden’s Ferry Review, the Portland Review, and Rhino. “Letter from Montaigne,” in this issue, draws from Montaigne’s essay On Some Verses of Virgil (translation, Donald M. Frame).

Elaine Sexton is the author of two collections of poems, Sleuth (2003) and Causeway (2008), both with New Issues (Western Michigan Uni– versity). Her poems and book and art reviews have appeared in Amer-​​ican Poetry Review, Art in American, Poetry, Pleiades, and numerous other journals.

Elaine Terranova’s fourth collection of poems is Not To: New and Selected Poems. She won the Walt Whitman Award for her first book and is a recent recipient of a Pew Fellowship. She has new work in Hotel Amerika, Pleiades, and West Branch. A chapbook, Elegiac: Footnotes to Rilke’s Duino Elegies, is forthcoming from Cervena Barva Press. She teaches in the MFA Creative Writing Program at Rutgers University.

Jamie Thomas lives in Detroit and is a visiting professor in the Languages and Literature Department at Ferris State University. A Recipient of an Academy of American Poets Prize, his poems have appeared in such journals as 32 Poems, 5 AM, the Missouri Review, Rattle, Verse, and online at Verse Daily.

Daniel Tobin is the author of five books of poems, Where the World is Made, Double Life, The Narrows, Second Things, and Belated Heavens. He is the recipient of fellowships from the NEA and the John Simon Guggenheim Foundation, and is Chair  of the Writing, Literature, and Publishing Department at Emerson College in Boston.

Jonathan Weinert is the author of In the Mode of Disappearance (Nightboat Books, 2008), winner of the 2006 Nightboat Poetry Prize and finalist for the Norma Farber First Book Award from the Poetry Society of America. He lives in Concord, Massachusetts, with the poet Amy M. Clark and their son, Jonah.

Cate Whetzel teaches poetry to school children through The Poetry Center of Chicago’s Hands on Stanzas program. Her poems have appeared in the National Poetry Review, New Plains Review, storySouth, Phoebe, Epiphany, and Breakwater Review. She is a graduate of Indiana University’s M.F.A. program and lives on the north side of Chicago with her husband, poet Ben Debus.

Lindsay Wilson is an English professor in Reno, Nevada. He has been named a finalist for the Philip Levine Prize, published four chapbooks, and has poetry, published or forthcoming, in the New York Quarterly, the Portland Review, Gulf Stream, the Clackamas Literary Review, and the Yem-​​assee Journal, among others.